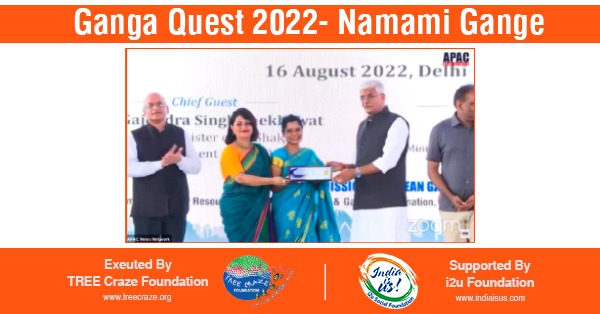 Executed by TREE Craze and supported by i2u, Ganga Quest is an annual national online quiz conducted to spread awareness about the Ganga river and its ecosystem. It is an initiative led by Namami Gange, which is a flagship program launched by the Union Government of India in June 2014 with a budget outlay of Rs.20,000 Crore.

Namami Gange aims to accomplish twin objectives of effective abatement of pollution, rejuvenation, and conservation of the National River Ganga. This integrated conservation mission relies heavily on public awareness, development of riverfronts, afforestation, river surface cleaning, and sewerage treatment infrastructure among others. i2u quadrupled its efforts to propagate the message of Namami Gange through Ganga Quest by reaching out to non-profits, educational institutes, corporate CSRs, volunteers, and the general public.

Recognizing i2u’s efforts as a partner, the award was bestowed by the Jal Shakti Minister Shri Gajendra Singh Shekhawat during the event organized by the Department of Water Resources, River Development and Ganga Rejuvenation, the Ministry of Jal Shakti, and the National Mission for Clean Ganga (NMCG), at the water sports club in New Delhi. The Union Minister for Jal Shakti presided over the gathering and was graced with the Guard of Honour by BSF members.

Speaking about i2u’s latest achievement, i2u co-founder Rachna Sudheen remarked, “It is indeed heartening for i2u to be recognized and appreciated on a national level. We have been conducting various online and offline activities to create a strong pitch for public outreach and community participation. Clean Ganga is a mission that’s very close to our hearts and we’ll keep working meticulously to support the government realize its objectives. i2u is also thankful to TREE Craze for keeping faith in our abilities to enhance outreach for Ganga Quest.”

Head at i2u, Alisha Vijoy commented, "Environmental conservation is no longer a luxury. It's an ultimate necessity that humans need to pay heed to as soon as possible. Through supporting Ganga Quest, i2u aimed to highlight the urgency to take concrete actions towards water conservation, afforestation, and environment preservation."

She further added, "As an NGO support ecosystem, we realise how important community participation is to bring about real concrete changes. With our support in outreach for Ganga Quest, our sole aim was to help people realise the ecological impact of Ganga restoration juxtaposed with the cultural and economical significance of the holy river."

About India Is Us